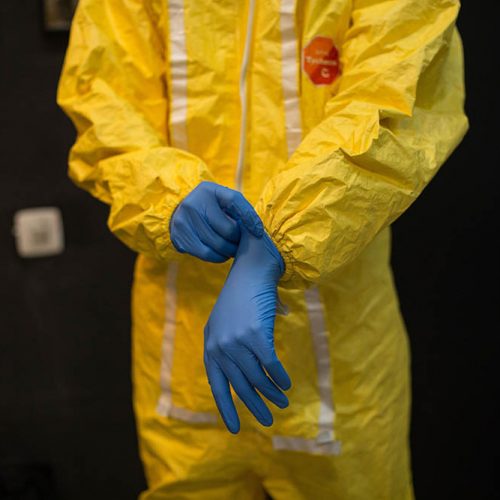 Protective suits are used throughout fire services and industry to protect personnel from exposure to dangerous chemicals during clean-up of spills or general chemical production.

After suit exposure, cleaning is required. Eventually, with use and after many wash cycles, the end of the useful lifetime of a suit is reached when it becomes possible for chemicals to permeate the suit. A responsible manufacturer of chemical protection suits in the UK approached Kore Technology to learn how the MS-200 could assist their business.

Various suits, many from fire services, had been sent back to the suit manufacturer’s laboratory for routine checking. Suits were left inside their storage bags. After taking a measurement of the background air in the laboratory, a sampling tube from an MS-200 was simply inserted into a sealed bags and after approximately 2 minutes a sample of ‘suit air’ was analysed.

Sensitivity And Detection Limit Of The MS-200

A representative subset of chemicals from a list of commonly encountered chemicals was chosen. To perform a quantitative analysis, gaseous standards in concentrations from approximately 30 to 100 ppm were produced by injecting the liquid sample into a Tedlar® bag filled with a metered amount of nitrogen. Results acquired in a ten second analysis are shown below.

Performance of the MS-200: In-Situ Analysis of suit-cleaning procedure

For this phase, an MS-200 was taken to a client in the chemical industry. This client has hundreds of suits to protect staff during work which exposes them to potentially harmful chemicals.

In this way, 42 samples were taken from 11 suits within 3 hours of set-up. On the first two suits analysed no contamination above the background sample could be identified. The third suit showed significant mass peaks above the background. As the operator was not aware of the client’s procedures, the MS-200 result was analysed ‘blind’ using the NIST database. A library search suggested that the unknown compound could be “Limonene”. It was than confirmed that limonene is the major constituent of the cleaning agent used when decontaminating the suits. The MS-200 mass spectrum sampled can be seen below. 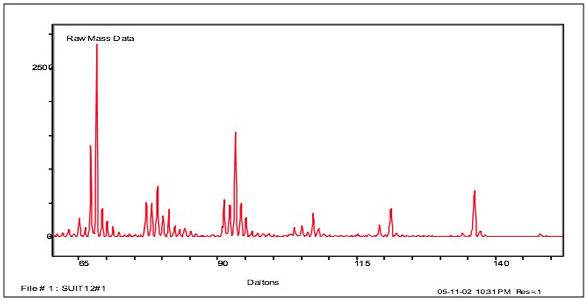 Limonene residues were found on 7 out of the 11 suits analysed, at various levels. No other contamination could be identified above levels noted in the table above, confirming the effectiveness of the cleaning process, within the detection sensitivity of the instrument noted above.