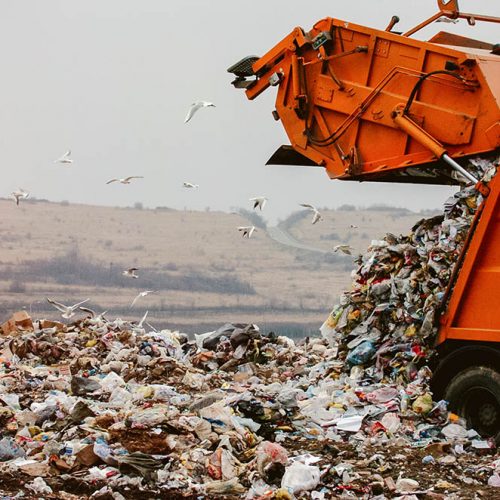 The European Union has a policy regarding landfill sites which means that hazardous industrial waste must not be mixed up with household waste. Household waste generates high levels of methane, which normally is burned off. This means that any other volatile organic compounds (VOC) that are emitted from hazardous waste are burned off together with the methane.

Protection of ground water at the landfill site is relatively easily achieved by an impermeable polymer layer below the site. However, gaseous emissions are more difficult to control. During operation of the site, the waste often lays in the open with no protection against emissions of hazardous VOCs. Once the site is finished it is normally closed off with a layer of clay and soil, which will contain emissions to a certain extend. However cracks and cavities still allow hazardous VOCs to be emitted into the environment.

Currently measurements of emissions from landfill sites are performed by collecting samples onto an adsorbent trap or Tedlar® sample bag, followed by laboratory analysis. The method of using adsorption tubes, which sample over an extended period of time is well understood and characterised. However, it will by its nature only deliver an average reading over the sampling period and therefore will not allow the monitoring of short term variations, which can occur due to a change in weather or wind direction. Alternative technologies which are capable of online measurement include portable FID detectors. However, these report only total hydrocarbon concentration, but not concentrations of individual compounds.

The MS-200 is a portable analyser that offers fast quantitative analysis for mixtures of VOCs. The working principles of the double membrane inlet system combined with time of flight mass spectrometry and the mixture deconvolution software mean that the MS-200 does not require the pre-concentration and GC-separation normally associated with the analysis of low concentration mixtures of VOCs.

We wanted to investigate the possibility of using the MS-200 to perform on the spot measurements of VOC emissions from a chemical landfill site.

Earlier studies, using adsorbtion tubes and laboratory based GC/MS analysis, have shown that the majority of the emissions from the site of concern are the following:

Before going out on site, we calibrated the instrument in our laboratory. Calibration was performed with calibration standards between 500 to 800ppb. The standards were either from compressed gas, or were produced by injection of the liquid into a Tedlar® sample bag.

A first control measurement was taken about 20m upwind from the site. The concentrations reported by the MS-200 were below the quantification limits.

The results from the different measurements are shown in Table 1.

The MS-200 has clearly demonstrated the ability to measure and quantify different chemicals that are released from a landfill site. Measured concentrations on the landfill site reached from mid ppb to low ppm level, which is the ideal measurement range for the MS-200. The MS-200 demonstrated detection limits in the low ppb range for all of the components investigated.

The instrument was carried between the different measurement locations, where it took about 1 minute to set the instrument up again, followed by about 2 minutes for the instrument to equilibrate with the sample. Every measurement at that location then took 10 seconds of actual analysis time. This allowed full analysis, reporting concentrations for individual chemicals of up to 30 individual sample points every hour.

Needing no GC column is one of the major advantages of the MS-200 for this application, in which most of the gases that are likely to be found are known, but their concentrations need to be measured. The MS-200 can analyse mixtures of gases without pre-separation, saving time and allowing the continuous analysis of a sample with changing concentrations (one data point every 10 seconds). Also the lack of the GC gives true portability, ensures easy maintenance and eliminates the need for the supply of carrier gases. The instrument only requires a charged battery in order to operate.