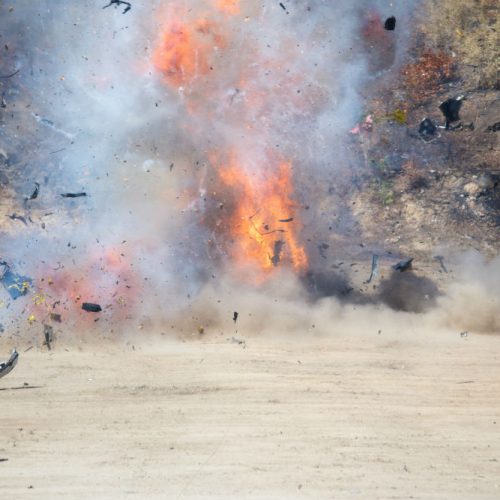 High sensitivity and specificity is crucial in the field of homeland security for the analysis of semi and low volatility compounds. Often this analysis is required for unknown identification and quantification.

Kore has recently designed, built and delivered a compact system for sample desorption, concentration and GC separation (PREFICS) prior to analysis by a mass spectrometer. As a spin-off from this work we have adapted our design of a rapid thermal desorber so that it can couple directly to the inlet of a PTR-TOF-MS. The first of these thermal desorbers has been tested successfully and has now been delivered to the University of Birmingham’s Molecular Physics group under the direction of Dr. Chris Mayhew. A conventional swab is inserted into the unit and then the jaws of the swab desorber are closed. The mechanism makes a high quality seal in such a way that pressurised gas can be forced through the swab with no leak of carrier gas or desorbed analyte. Swabs may even be reused multiple times.

Solutions of TNT in acetonitrile / methanol were deposited on a suitable swab which was interfaced directly with a PTR-MS. The solvent was allowed to evaporate for 30 seconds, the data acquisition started, and then the swab was inserted into the unit.

The first data plot shows two masses: the solvent peak for acetonitrile and the molecular ion for TNT (both protonated). The desorption and detection is rapid, and the analyte has been completely desorbed within ~20 seconds of starting the desorption process. 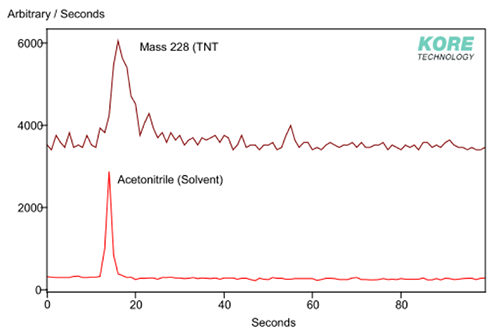 In the second plot are three ‘stacked’ data sets for three different loadings of the swabs: 100ng, 10ng and finally 1ng. At 1ng, the detected signal is, of course, lower than at higher loadings, but is still clearly generating molecular ions for TNT at above the background. Swab temperature 140°C. 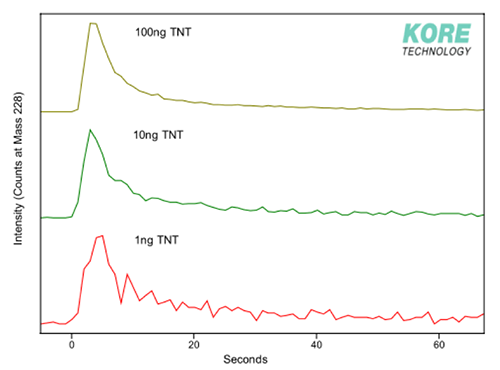 Having established that it was possible to detect a 1ng loading of TNT, we then investigated the optimum swab desorption temperature, in an attempt to detect even lower amounts of TNT deposited on a swab. 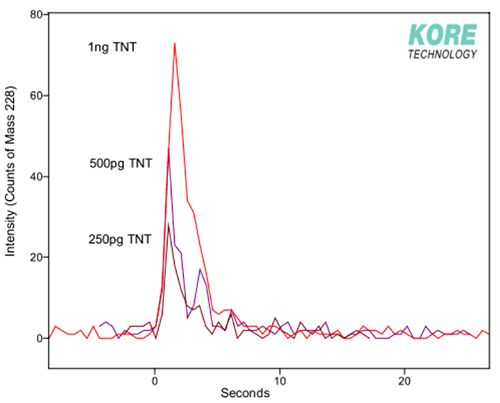 In this plot we see three overlaid traces of the protonated molecular ion for TNT at mass 228 for three different loadings. The swab was operated at 150°C for these acquisitions. We were able to detect TNT signals from a 250pg loading of a swab. Note also how quickly the compound is desorbed from the swab, and how the data acquisition is finished in less than 10 seconds for these low amounts of material.

Following on from the direct swab desorption, we attached the swab desorber to Prefics, the front end GC separator for Kore Technology instruments. Prefics is conceived to be a ‘universal front end’ separator of complex chemical mixtures that could be joined to any suitable detection technique. Results shown below were taken with Prefics connected to a PTR-TOF-MS, but any mass spectrometer or indeed other detection technique could be considered. Analyte is first flushed from one of various quick-swap inlet modules onto a thermoelectrically cooled trap. This allows subsequent splitless introduction onto a short GC column in a custom designed, miniature and fast heating oven. A typical semi-volatile analysis, including pre-concentration and chromatography might typically take just five minutes, yielding detection limits in the picogram range.

This data was taken during a quick pre-delivery check of Prefics with an unoptimised PTR-MS. A rather well used swab (PTFE felt in a card holder) was employed, with no special pre-treatment. Therefore as a check, it was first run without any deliberate dosing. For the second run the swab was dosed with 20ng each of DNT and TNT. 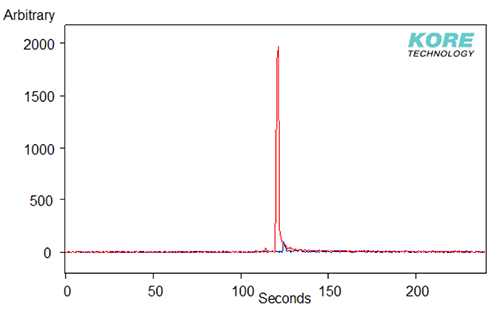 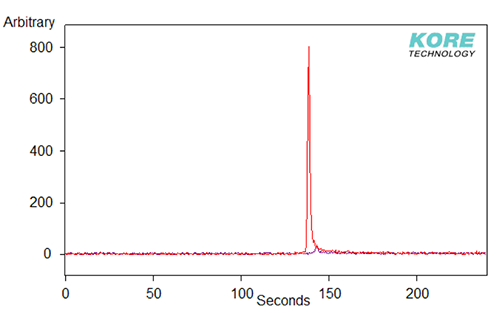 Single ion Chromatograms (SIC) for the protonated DNT at 183amu and protonated TNT at 228 amu are shown above for the blank and dosed runs. There would appear to be small residues on the swab in the blank run, presumably from earlier experiments. The swab was very dirty before the first run so there are plenty of other compounds in the full data-set for the blank run. It should be noted that the times indicated include 60s of trap back-flush before the start of the GC oven program.

The software also allows us to extract a baseline-subtracted mass spectrum for the each of the chromatographic peaks shown above. In both cases the spectra are very simple because they are dominated by the protonated parent molecule. The reactor conditions were rather vigorous in this run so smaller electron impact like fragment peaks can be seen at 165 amu (DNT) and 210 amu (TNT). Reactor conditions can be adjusted to make these peaks very small, if desired, but they can also provide additional confirmation of compound identity. 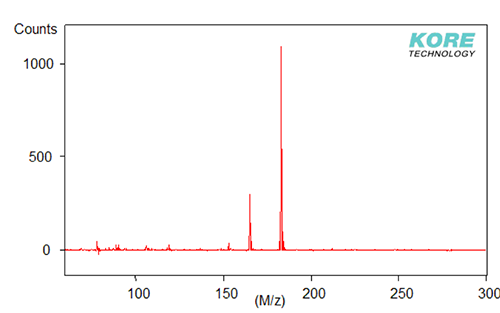 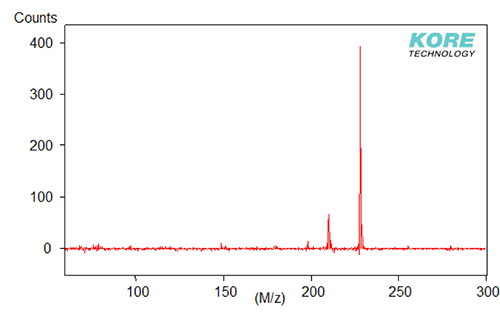 Experiments at Birmingham are now underway to explore various parameters such as the optimum desorption and PTR analysis conditions for various analytes, as well as detection limits and memory effects etc. There is no compound separation using the desorber with the PTR because there is no gas chromatograph. Nevertheless, the technique may still be very useful when looking for a known set of analytes owing to the rapid data acquisition time and the ability to monitor for all mass peaks in parallel.

Kore Technology Ltd would like to acknowledge the fact that the PREFICS technology was largely developed with funding from the UK Ministry of Defence.