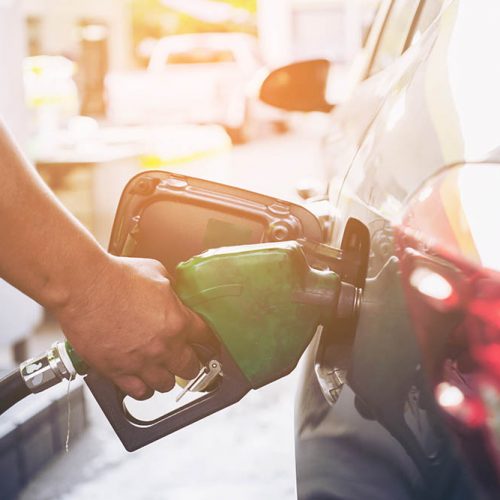 Benzene has long been of concern to health and is known to be a human carcinogen if exposure occurs over an extended period. Ambient concentrations have significantly reduced, however, there is still concern about the level of transient benzene concentrations where petrol is handled or stored.

Current methods for measuring personal exposure include adsorbent tubes, worn over a few days, and subsequently analysed in a laboratory. The exposure during different activities is then modelled. The MS-200 offers portable continuous exposure analysis for benzene in the low ppb levels for exposure where and when it happens.

The MS-200 is a portable analyser that offers real-time, continuous exposure analysis for benzene. Our experiments aimed to test whether the MS-200 could indeed provide this data in situations where a car driver is exposed to rapid increases in benzene concentrations, such as those experienced when refuelling a car.

Measurements were taken on four separate days, approximately a week apart during June and July on a typical petrol station near a major UK A-road, but in a rural setting. Measurements were taken around midday, with traffic and usage of the petrol station estimated to be of a similar level on each occasion. The weather conditions on all four days were similar, with temperatures of about 27°C to 30°C, sunshine or slight cloud coverage, although with differing wind speeds.

The MS-200 was calibrated with 1 ppm of benzene prior to the experiments. It was placed on the rear seat of the car and a 3m PTFE sampling line was attached to the driver, to sample air from the breathing region. A data point was collected every 30 seconds, representing real time measurement of exposure to the operator.

The experimental conditions are summarised below. In all cases refuelling took about 2 minutes. The benzene concentrations measured during the experiment are shown in Figure 2. 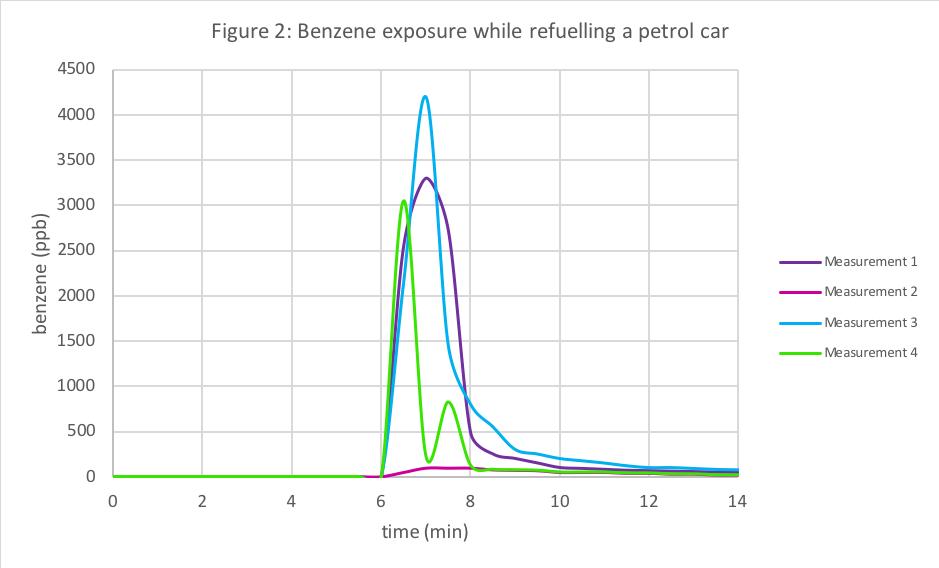 These measurements show that the MS-200 is very effective at measuring real time exposure levels and provides greatly improved information compared to a simple average, measured when using diffusive adsorbent tube samplers. Measuring exposure, even at low concentrations, when and where it happens has distinct advantages over methods measuring an average exposure over a day, and then using modelling in order to calculate the exposure during the different activities.

The data shown in Figure 2 demonstrate how a change in wind direction and speed dramatically affects the real exposure to the driver – this is information that cannot be obtained by long time integrating methods.

The instrument also has clearly demonstrated the advantages of true portability and mains power independence. The only requirement for this measurement was to ensure that the instrument was safely fitted on the rear seat. After starting the instrument, sampling and analysis happened automatically, not requiring any interaction of the driver. The instruments sample pump allowed for sampling through a 3m long flexible PTFE sampling tube into the inlet, enabling the driver free and natural movement whilst the MS-200 was sampling air from the breathing zone of the driver.

Once back in the laboratory, the automated processing routine of the operating software meant it was a matter of minutes to process all the data and calculate the actual concentrations of exposure, based on the calibration performed earlier.