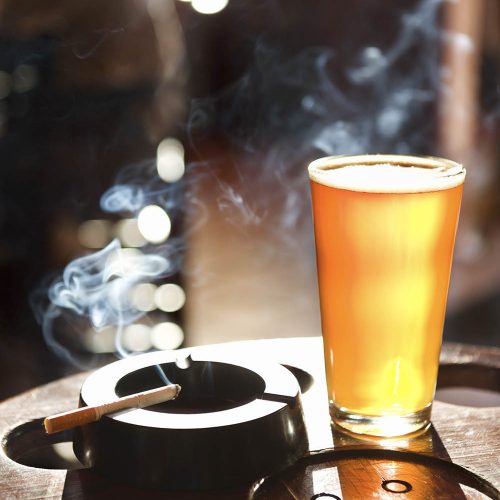 The passive exposure of non-smokers to various compounds from cigarette has long been a health concern. A major concern are the volatile organic compounds (VOCs) emitted when tobacco is burned. Many of these VOCs are found to be, or are suspected of being carcinogenic.

For these reasons smoking restrictions have been introduced over the last two decades, and on 1st July 2007 it became illegal to smoke in any enclosed workplace, public building or on public transport in the UK.

Before these bans were put in place, Kore was involved in some research related to the passive exposure of non-smokers to cigarette smoke in pubs. The University of Glamorgan were investigating the design, use and efficiency of ventilation equipment. Currently the efficiency of ventilation equipment is assessed by measuring concentrations of particulates, and carbon monoxide in the air. However, depending on the design and working principles of the ventilation equipment, VOCs might not follow the same pattern of removal. Therefore we wanted to exploit the unique VOC measurement capabilities of the MS-200 – continuous ppb levels – for measuring changing concentrations of VOCs in a pub where smoking is permitted. The University of Glamorgan invited us to participate in a preliminary measurement campaign in a London pub, some results of which are described in this application note.

This was an initial feasibility study to demonstrate the capabilities of the MS-200 and the effect of ventilation equipment on the removal of VOCs. Therefore it was decided to concentrate on the measurement of three of the major VOCs in cigarette smoke. The instrument was calibrated for benzene, toluene and styrene. The benzene standard was taken from a pressurised and certified gas cylinder. The standard for toluene and styrene was produced by injecting the liquid compound into a Tedlar® bag containing nitrogen.

On the day of the measurement, the MS-200 was set up on a shelf behind the bar, at about chest height. A 30cm long PTFE sample line was connected to a Nafion dryer followed by the MS-200 sample inlet.

In order to establish a background reading a charcoal filter can be attached to the sample line, stripping the sampled air of hydrocarbons to give clean air. The instrument was allowed to warm up in this state.

A 10 second analysis was performed to create the background reading. Following this the calibration standard was attached to the inlet. After 3 minutes equilibrium time, an analysis was performed to establish the sensitivity of the MS-200 towards the components in the calibration standard. After calibration, the charcoal filter was fitted in order to allow the instrument to return to the background reading, before starting the measurement series.

At the beginning of the measurement the charcoal filter was removed, leaving the MS-200 to sample the air from behind the bar area. The instrument was set to continuously perform one ten second measurement of the air every minute.

The measurement was started at 16:00 hours. At this time the doors of the pub were open and about 10 people, 3 of whom were smoking attended the pub. At 16:45 there were about 20 people and still only about 3 smokers in the pub. At 17:30 there were about 30 people in the pub of which about 6 to 7 were smokers. At this time the pub doors were closed, without switching on the ventilation. When the doors were closed about 4 people were smoking. At 17:50 the ventilation was switched on. At about 18:00 the pub was getting fuller with about 40 people present of whom very few smoked. At this time the doors were opened again. The measurement was stopped at 18:45, and was followed by a further calibration check, as described above. 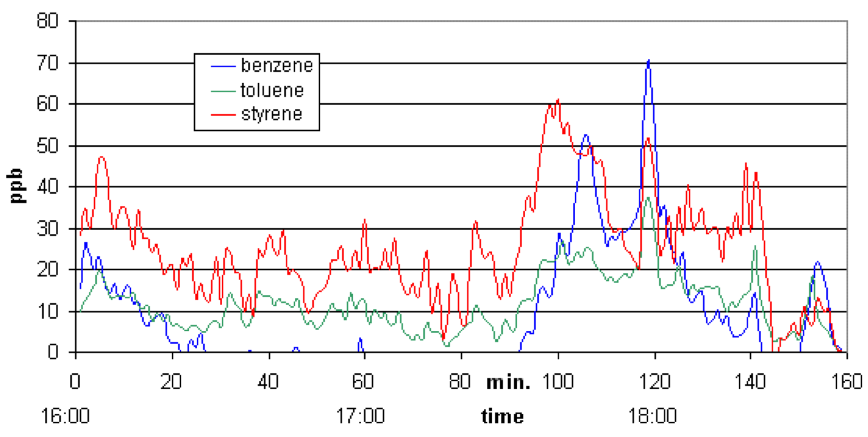 The measurement series was started at 16:00. There are clear peaks in concentration at about 16:05, 16:45 and around 17:00. The chart shows clearly that after the doors where closed at about 17:35 that the concentrations for all three VOCs investigated are increasing within 10 to 15 minutes to a level of between 2 to 5 times the concentrations previously measured. There are further peaks at just before 18:00, which correspond with the pub getting busier. Shortly after the ventilation system is switched on around 18:00 the concentrations decrease to a lower level. At this time the pub had become quite busy with more people lighting up than previously. This can be seen in the data, which shows slightly higher concentrations than in the early afternoon. The doors were then opened again and towards the end of the measurement the pub was getting less busy, as people went home after their after-work drink. Again this is clearly visible from the data returning to similar levels as during the early afternoon measurements taken between 16:30 and 17:30.

The experiment clearly demonstrated that the sensitivity, detection and quantification limit of the MS-200 were sufficient to perform real time measurement of the exposure to selected VOCs of bar staff and visitors within a pub. The continuous and real time measurement capabilities of the MS-200 in the low ppb levels are key requirements in order to demonstrate that the exposure to various VOCs is strongly dependent on the number of people smoking and the operation of the ventilation equipment or other air exchange mechanisms (open doors).

As the MS-200 is a portable analyser, which can take a series of measurements with minimal user interference, real time measurements were readily performed. Most customers in the pub were probably unaware of this scientific instrument taking air measurements at the bar. Therefore behaviour pattern were not changed, allowing a realistic assessment of the VOC concentrations.