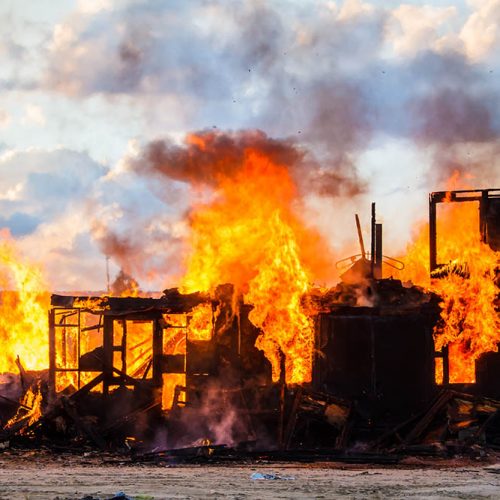 Fire scene investigators have a requirement for an effective tool to determine the presence of liquid accelerants early on in suspected cases of fire raising. The high volatility of accelerants mean that sampling methods are crucial in determining what is present in suspected arson cases. Current methods are inefficient in some situations and better solutions need to be sought.

This note describes initial work on Kore’s MS-200 as a fire investigation tool, giving investigators positive information at the scene. This would allow them to progress in a definite direction with a degree of certainty, and without being delayed by having to wait for confirmation of results following laboratory analysis.

One of the most common liquid accelerants used is petrol, as this is extremely flammable and easily available. This was the main accelerant chosen for this initial evaluation.

Samples of synthetic, foam-rubber backed carpet were burned in an open top stainless steel furnace in the untreated state, and after being soaked with 2 ml of unleaded petrol. After the flames died, the air above the carpet sample was analysed by the MS-200 portable MS, with each analysis taking 30 seconds.

The spectra of the samples burned with petrol showed strong hydrocarbon characteristics in the 45-110 amu range, with clear benzene / toluene / xylene fingerprint spectra in addition to the expected alkane fingerprints associated with unburnt petrol. However, after a few minutes, the hydrocarbon spectrum died away rapidly. In the case of the untreated sample, much smaller traces of hydrocarbons were visible, due to the burned foam rubber and synthetic fibres.

A spectrum obtained from unburned petrol vapour in nitrogen in the low ppm range is shown here. 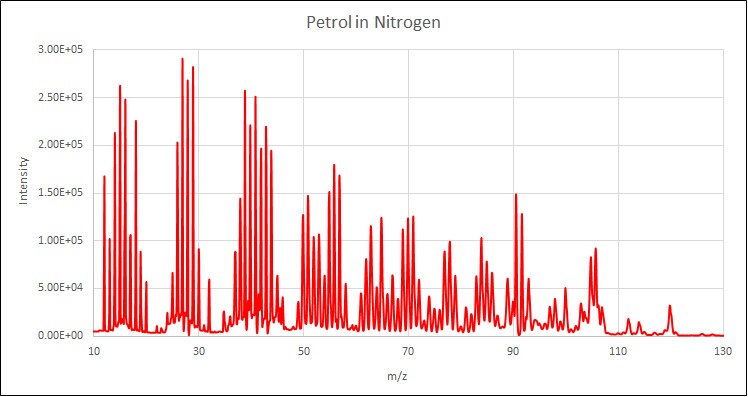 The conclusion from these results is that the best chance of detecting accelerants lies with on-site analysis immediately after the fire has been extinguished. Delays in sampling or analysis lead to evaporation and disappearance of substances that may have been used as accelerants. MS-200 is an ideal candidate for fire scene investigation, as it can give instant analysis results of samples of burned material. The mass spectra displayed can be easily interpreted, and quantitative results can be obtained if desired.

Further trials of the MS-200 will now take place, involving investigations of real fires with various other accelerants.