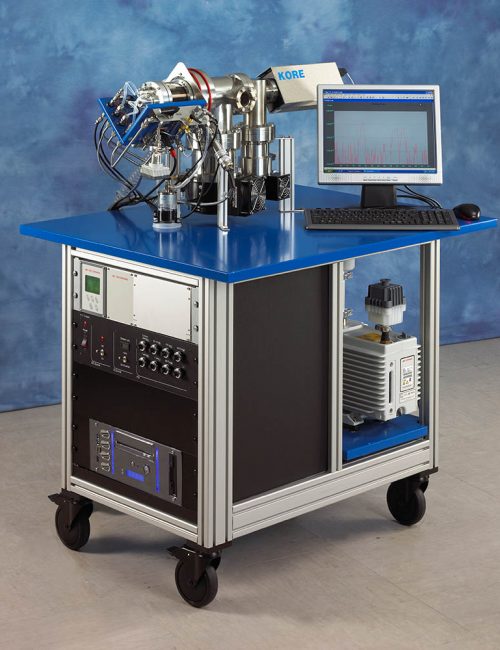 At the client’s request, we have designed and delivered a research quadrupole-based PTR-MS (proton transfer reactor mass spectrometer).

The instrument is now at Horiba in Japan, where its main function will be to explore the detection of low level components in automotive exhausts in real time during engine monitoring.

The instrument has been designed with an ‘open architecture’ that permits a researcher to change the configuration of the PTR front end to accommodate various experiments.

In this mode a primary beam, H3O+ (or ‘Hydronium’), is created within the hollow cathode glow discharge source. The beam is passed into the PTR section where analyte is introduced. General components in air are not ionised by the hydronium beam, but some inorganic gases and most organic gases are ionised in a ‘soft’ manner that preserves the molecule.

The technique requires that the primary beam species are always in excess compared to the analyte, which is dilute. Up to (approximately) 50ppm of an analyte can be analysed without the hydronium population being reduced significantly (thus ensuring a linear response).

In a conventional mass spectrometer, detecting S in the presence of O2 is not trivial. The main isotope of S is 32S with an exact mass of 31.972. The most abundant isotope of oxygen is 16O, and the exact mass of 16O2 is 31.989. Thus, both ions appear at mass 32. This is known as an ‘isobaric mass interference’.

The H2S ion occurs at mass 34 (1H232 S). Unfortunately, one of the (isotopic) ions of O2 is 16 O18O+ , and this also has a mass of 34. The ‘exact’ masses of these two molecules are 33.9877 and 33.994 respectively, and thus a mass spectrometer would need a resolving power of 5,400 to separate the two mass peaks. This is certainly possible (though not with a quadrupole MS), but it has implications for the size and cost of such an instrument.

The PTR-TOF instrument offers an alternative way to overcome such ‘mass interference’.

In the PTR-TOF (proton transfer reaction TOF), it is possible to employ an ionisation scheme that uses the ion H3O+ to ionise the compounds of interest, by a method known as “proton transfer”. H2O has a ‘proton affinity’ of 691 kJ/mol. This is less than H2S, which has a proton affinity of 709 kJ/mol, and so in a collision H2S will remove the proton from H3O+ and become ionised. By contrast, O2 has a proton affinity of 421 kJ/mol, and will not be ionised by H3O+. Thus it should be possible to distinguish completely between H 2S and O2, because only the H2S will be ionised in this particular PTR scheme. 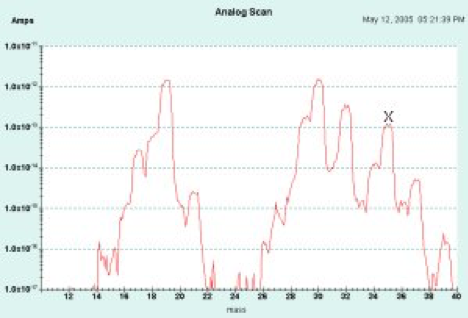 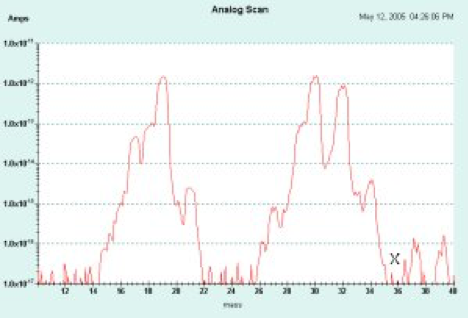 This is data acquired immediately after the H2S sample, from room air. The signal at mass 35 has disappeared. Example Data: Methanol Detection in PTR Mode 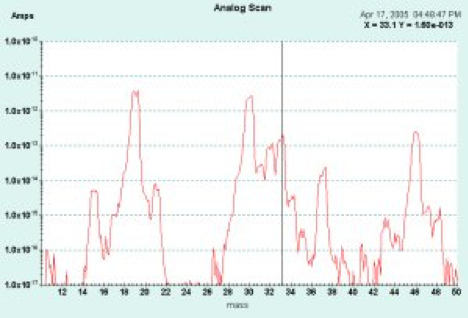 Methanol (CH3OH) has a proton affinity of 754kJ/mol compared to 691kJ/mol for water. Thus, methanol can be ionised by proton transfer.

The adjacent data was acquired from a gas mixture of 10ppm methanol in nitrogen. The molecular mass of methanol is 32, but with an added proton the appearance mass is at 33. Greater than 9 million c/s second were recorded at mass 33.

In this mode, the glow discharge is run on an inert gas such as argon, xenon or krypton, instead of N2/H2O mixture. The primary ion produced from the glow discharge source has a specific energy in its ionised state. If it impacts a molecule in the collision cell and that molecule requires less energy to be ionised, then that molecule can become ionised and the primary ion will convert to a neutral particle. The sequence is as follows: 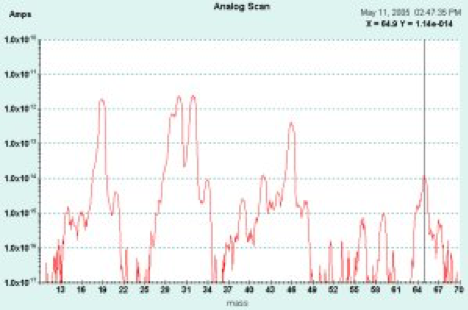 The instrument features a conventional electron impact ionisation source in the high vacuum section. When an analyte of interest cannot be ionised by the proton transfer method, the glow discharge source may be switched off and the electron impact source activated.

Electron impact ionisation is a very common method, and a large database of EI spectra exists (NIST database). All components are ionised by this method, but the excess of energy does result in fragmentation. At times this can be useful for identifying a compound. 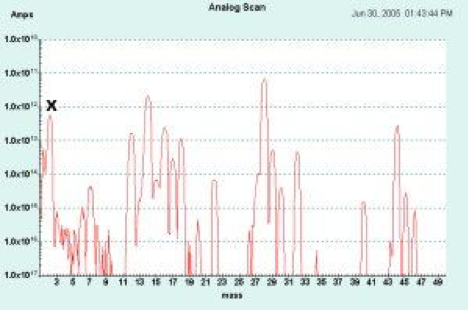 The adjacent spectrum was acquired from a calibration gas mixture containing 2.6% Hydrogen. The signal at mass 2 was 3.6 million counts per second in EI mode, and this equates to a detection sensitivity of 0.005% (limited by background count at mass 2 due to hydrogen in the system). 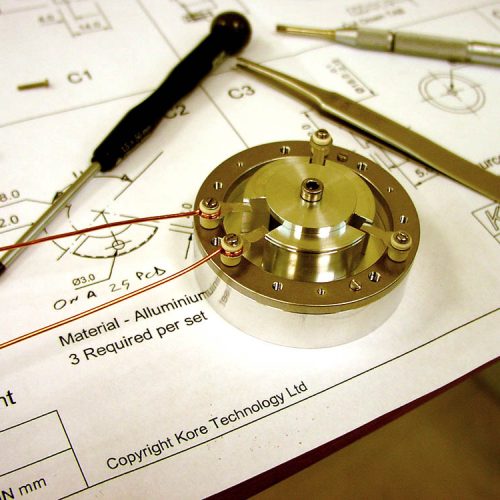 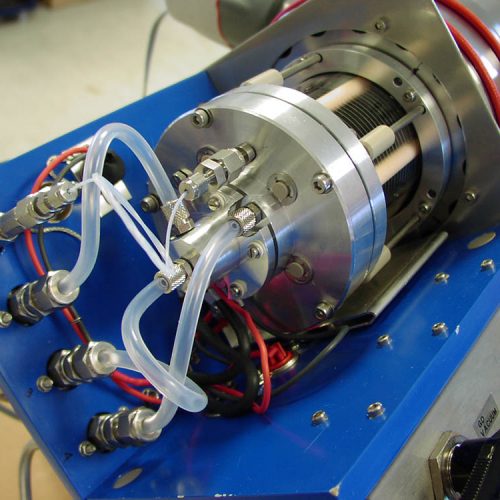